Land-Losers of Dhenkanal do DHARANA at Jantar Mantar.

New Delhi (9/10) – Today, on behalf of the affected villagers of the proposed CESC Power Pvt. Ltd. at Dhenkanal Sub-Division & RSB Metal Tech. Pvt. Ltd. at Kamakhyanagar Sub-Division of Dhenkanal District, a DHARANA was done at Jantar Mantar under the leadership of the Great Farmer Leader Er. Debashisha Hota. Later they’ve given a 12 charter demand note to the Prime Minister.

We’ve requested for 3-Party-Discussions comprising of Ours Loser-Citizen Forums with Company Owners and the Representation from the Government as the Mediator earlier a number of times. But, everything goes in vain. Nobody in the administration is listening to our demands. They’ve mutual understandings with the company owners. We’re afraid of losing everything by their mis-utilization of force, Hota told on this occasion.

The Bandhua Mukti Morcha Leader Swami Agnivesh has addressed to the protesters by saying that the land & water is of ours. So, nobody can snatch it from us without our due consent.Later Muralidhar Rao,the National Secretary of BJP & Akhtar Raza, the National General Secretary of JD(U) rushed to the spot to give support of their respective parties for the cause.

A blood donation camp was organized by Utkal Bipanna Sahayata Samiti on Dt. 09.10.2012 on the occasion of “UTKALMANI GOPABANDHU DAS JAYANTI” (The Seva Day) in the “SEVA” premises of UBSS at Mancheswar, Bhubaneswar. The Managing Director of Vivekananda Hospital, Bhubaneswar and the Chief Guest of the programme Sri Shibanandan Pati donated blood and focused on the requirement  of  blood in the society. The President and  the Asst. Secretary of UBSS Sri Prakash Betala and Sri Kailash Chandra Senapati respectively were present in this programme and encouraged the donors.  Sri Indramani Send, Treasurer, UBSS donated blood along with his wife to encourage  the donors.   57 units of blood were collected in the camp. The programme was  managed properly by the Coordinator Sri Manu Patra, Asst. Coordinator Sri Rudranarayan Mohapatra, Sri Hrushikesh Nag and  other volunteers present. 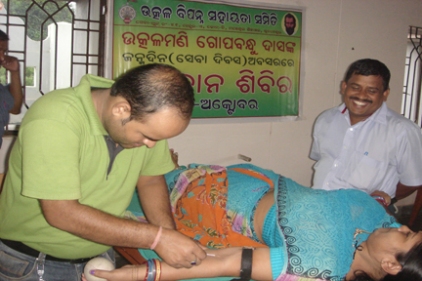